Last week, I received my Closed Beta invitation to StarCraft II and immediately I downloaded the client – which took me 16 hours – and installed the game. I was very excited of course, more than a decade of waiting for the greatest Real-Time Strategy game history. 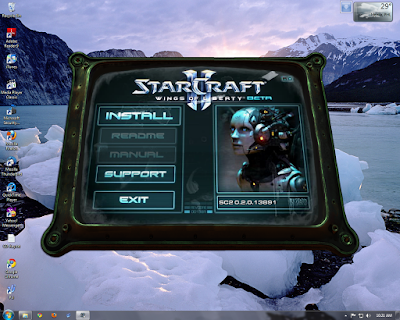 Join me as I show you what’s inside and what to expect with StarCraft II! 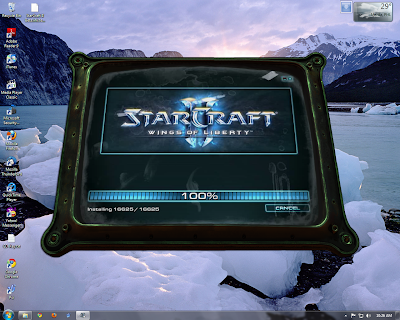 Before we proceed, for the record, the Non-Disclosure was lifted on February 18, 2010 herein quoted:

We’re pleased to announce that we have decided to lift the confidential nature of the StarCraft II Beta Test. This means that beta testers are free to show and discuss the game with your friends, as well as take screenshots, record gameplay videos, etc. So feel free to share that amazing game you just played. Enjoy!

The first time that you launch StarCraft II you will be asked to login to your Battle.net v2.0 account. (If you have not created one, just visit: Battle.net.) The next thing you will need to do is to create your new SC2 character. 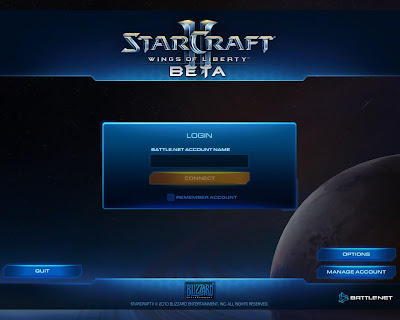 There are two parts in our Bnet2 character names: NAME.identifier. When you are first asked to create a new character, the first window will ask you for your character’s name. In my case I chose: Yarso. 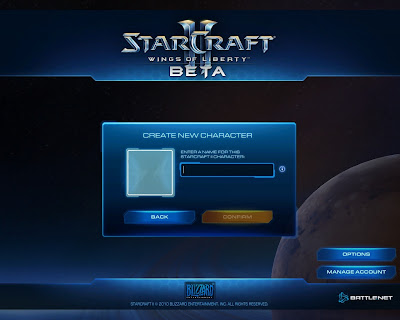 After clicking the “confirm” button, the system will ask you to create provide an identifier, this is the second part of our Bnet2 character names. I chose: starcraft. Now I have my SC2 character named: Yarso.starcraft.

At this point in time there are no other information as to how the NAME.identifier format is being used other than “to keep characters unique”. No one knows if the “NAME” is unique or not. No one is sure if the “identifier” is unique or not.

But if we are going to go back and read the plans they have for Bnet2, we can guess that the NAME.identifier format is on a per Bnet2-account basis. Meaning, if I have a World of Warcraft character by the name of “Yarso”, the system will know which “Yarso” it is supposed to update.

If that is correct, then we will have something like this in the near future (using my own format):

However, that raises some confusion and invites impersonation. But then, if we will only have one (1) character per Bnet2 account then how many are willing to buy a new SC2 just to impersonate someone they don’t like?

Going back, once you are in the Bnet2 interface “home”, you will see the current headlines from Blizzard and a little statistic that tells you the number of online players and the number of running games. There is also the “Support” button that leads to the support website, and “Leave Feedback” which is currently set to the SC2beta forums. 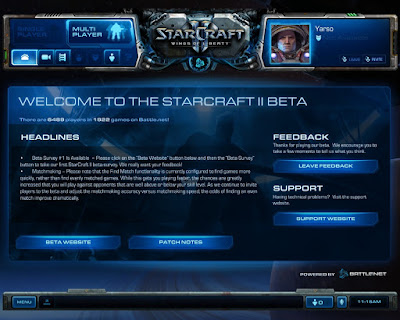 If you look on the upper-left corner of the interface you will see the “Single-Player” and “Multi-Player” buttons. Below it are the: “Home”, “Replay”, “Ladders”, “Social”, “Achievements”, “Profile”, and the “Help” buttons.

On the upper-right corner, your currently selected portrait, your “NAME”, your active “Achievement Title”, and the “Leave” and “Invite” buttons. The leave button is for when you are in a “party” or in SC2 terminology, pre-made team and you want to leave (obviously). The invite button is for inviting or forming a pre-made team.

At the bottom of the screen, there is the “Menu” button, the “chat bar” (probably for the planned chat feature), the “Friends” button which also shows how many of your friends are online, the “Mic” button, and your system time.

you should probably know

If you haven’t noticed it, the Single-Player button shows up only after you login to Battle.net v2.0. In other words, you can not play any single-player missions/campaigns unless you are online in Bnet2, which in itself requires an Internet connection. 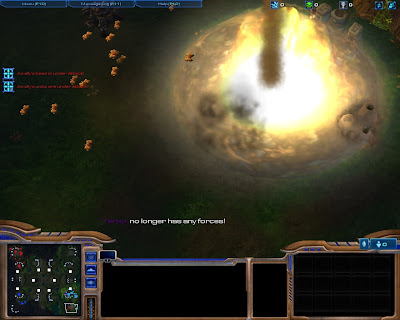 This is the first thing that I noticed, and I understood then that they did it this way for the Achievements feature. After all, how are they going to keep track of your achievements if you are not connected to Bnet2, right? This also explains why they removed the “LAN” option – if you are already connected to Bnet2 which in itself is a form of “LAN” (fyi: the Internet is also called WAN, or the Wide Area Network), then the “LAN” feature is useless and redundant.

I can think of more reasons why they chose this path and we can definitely put aside piracy here. Example, the growing number of third-party LAN/WAN networks. This third-party network was first made possible by the folks of FSGS or the Free Starcraft Game Server (later renamed to: Free Standard Game Server). It looks exactly like the classic Battle.net. (Trivia: The largest implementation of FSGS in the Philippines was Tri-Isys‘s FSGS.)

After FSGS there came bnetd, and the rest is history. Many of the earlier implementations were successfuly stopped by Blizzard but as time moved-on (and developers got wiser and found another way around laws governing proprietary/trade secrets), the community of third-party game servers simply exploded. 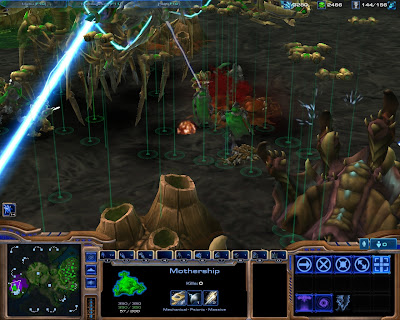 Now, with this new system, everyone will be forced to buy a CD-Key (at least), add that CD-Key to their Bnet2 accounts, then they can login and play SC2 in any terminal with StarCraft II installed. Neat eh?

Oh, there’s confirmation already, that was the first thing I asked in the SC2 Twitter dev chat earlier today. This is their answer:

Is logging-in to Battle.net version 2.0 mandatory even for Single-Player Games?

Yes. StarCraft II does require an online connection and you must login the first time you play. We are in the middle of adding an “Offline” feature which allows you to play the Campaign offline if you, for example, are traveling and want to play on a laptop. Playing while connected allows your progress in the campaign to be saved online to your account. This means if you switch to a different computer to play you can pick up from where you were.

Now the juice. The first time that you click the Multi-player button, a window will pop-up called “Multiplayer placement”. You have three options: “New Player”, “Experienced”, “Veteran”. The New Player option is for the newbies into the RTS or Real-Time Strategy genre. The Experienced and Veteran, that’s self-explanatory. 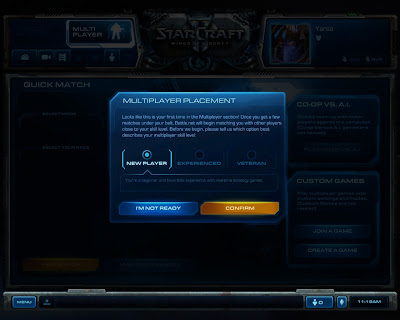 If you choose the “New Player” option, you will be given five (5) “Practice” Matches per game mode. The game modes are:

These practice matches are also not just “practice” matches. The system will use the data it gathers in determining which Ladder League you will best fit. There are five (5) Leagues currently available:

If you are a newbie in RTS games, you will probably end up in the Bronze or Copper Leagues (unless you can quickly grasp and learn how to win in an RTS game). Each league also have Divisions with each division having up to 100 players only. Each division have their own “Top 8” qualifiers which will in the future, move on to the (for example) semi-finals and compete with the other divisions of the same league. 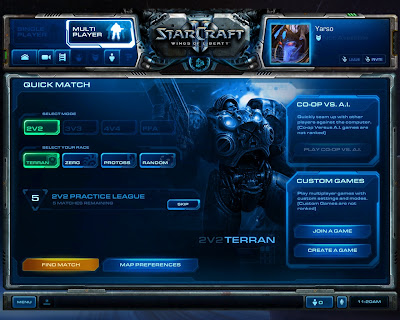 Confused? I hope not. Let me help you:

So what happens if a player improves and becomes too good for his/her current League? The Bnet2 system promotes him/her to the appropriate League, and vice versa, you can get demoted. How the system works, no one knows yet (or if Blizzard will ever release that info).

There are a total of seven (7) Ladder Rankings in the game as of this phase of the beta. These are: 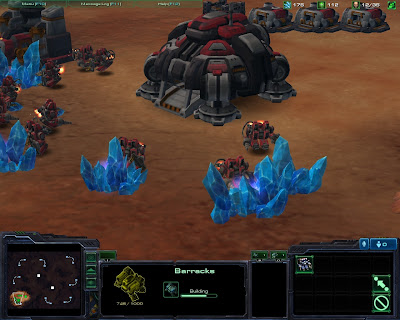 Finally the gameplay. At first you would think (and feel) that it is still the original StarCraft, but as you play more and more matches you will come to realize that this is indeed StarCraft II, there are more differences than similarities.

Do not expect your SC tactics and strategies will work this time. Do not expect that because you win a lot using the same tactic and/or strategy that it is your winning formula. In StarCraft that may have worked for you but in StarCraft II you are in for a surprise!

The units are well diversified and made more specific in terms of functions, as well as strengths and weaknesses. If in StarCraft you can just go create countless of Protoss Carriers and dominate the map, do not be so sure in StarCraft II – there are units in all three races that can wipe out your Carrier fleet.

Is StarCraft II hard? Nah, it is easy. But what makes me come back even though it is only a beta is the fun of it. There is always something new to learn and something to new to try. Not to mention, we get to play with all the Leagues from Platinum to Copper because the match-making was adjusted temporarily to prioritize finding a game than finding a balance match. That means I have a growing database of replays that I can study.

That’s all for now! Thanks for tuning in!! 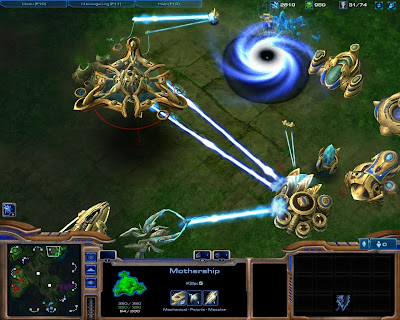 Playing StarCraft II Beta: My Thoughts and Experience by gameshogun™ 🎲 is licensed under a Creative Commons Attribution-ShareAlike 4.0 International License. Permissions beyond the scope of this license may be available at Legal Notice.

My review of the StarCraft II: Wings of Liberty invitational beta now that the NDA has been lifted.