Update 2009-10-20: Added instructions in creating a shortcut to run POL-WoW. Works fine under Ubuntu 9.10 “Karmic Koala”.
Update 2009-09-20: New wow-dualboot2.pol file, if the previous one did not work. Also did minor changes in the intructions below.
Update 2009-09-06: If you left a comment prior to the URL change, you can read it here 20 Comments from Old URL. Then you can go back here to post a new comment/reply. Thank you and sorry for this minor inconvenience.

Now back to our regular show.

And do you know that I can play World of Warcraft, Guild Wars, Neverwinter Nights 2, WarCraft III TFT, and track my game time via Xfire? No, all of these games and Xfire does not have any support for Linux unlike Second Life which offers a native Linux client, or EVE Online which used to offer support via Cedega.

No crashes, cool graphics (for my 7300LE NVIDIA vidcard), and no problems at all even though I’m running a 32-bit game under a 64-bit Ubuntu Linux distro. How did I do that? How was I able to play smoothly?

Come, I will show you how you can run Blizzard Entertainment‘s World of Warcraft on your Ubuntu Linux gaming machine.

Before we begin, I want to inform you (again) that I am using Ubuntu 9.04 “Jaunty Jackalope” 64-bit. The steps below should be similar to any Debian-based distros like Linux Mint and well Debian (obviously). For other distros, just adjust it according to your distros methods and commands.

First of all, you have to install WINE and PlayOnLinux (POL is actually enough but you may need WINE later, if for example you are going to install the Curse Client for your WoW addons).

Once you have those two installed, you can start following the steps below.

There are two paths you can choose from depending on how you want to install WoW. The first is installing the game on your Linux partition directly, and second is by linking your installation to your existing Windows XP game folder.

Install World of Warcraft On Your Linux Partition

If you are not a dual-booter, then you can install the game on your Linux partition by following these steps. Otherwise, you can go to the next section.

There are no POL script for installing World of Warcraft: Wrath of the Lich King. You can not install the game as you normally would – “run the exe file” – because POL use different folders per WINE-application. The trick then is to the run Wrath of the Lich King’s installer file like this:

If you copied the contents of your WotLK DVDs to your harddrive, then point the {PathToYour WotLK Installer exe file} (see above) to it. If you did not, then point it to your DVD drive.

What it does is run your installer via the POL ‘WorldOfWarcraft’ wineprefix, which will install it to the WoW folder installed via POL. If you don’t do this, your installer will say that you have to install World of Warcraft first, because it is reading the WINE registry located outside of your POL wineprefix.

Install World of Warcraft and Link to your Existing Windows folder

If you are dual-booting (which probably you are) to play WoW under Microsoft Windows XP, then there is no need to have duplicate copies of your WoW folder. This method will also save you 6gb of harddrive space 😉 One note however, this guide assumes that your Windows Partition is automatically mounted on boot of your Linux distro. If not, install NTFS Configuration Tool which is in Synaptic.

But if you are not dual-booting, or you want to install the game on your Linux partition directly, go back to the previous section and follow those steps instead. This section is only for dual-booters who does not want to have a duplicate installation of the game.

Now that everything has been setup, it is time to create a symlink:

If for some reason, the shortcut icons did not show up on your menu and/or desktop, follow these steps:

The next set of steps are the final configurations you have to do to make your World of Warcraft on Linux as fast and as stable as it can be. These instructions are applicable to both direct and dual-booting installations, as well as, to those who did not use PlayOnLinux.

Right after the step above, the PlayOnLinux wizard for the application ‘WorldOfWarcraft’ should still be open (if not, just re-open it as instructed in the previous instruction), follow the next steps:

This instruction is mainly for Ubuntu as this is the distro that I am using. What is presented here is simply the re-mapping of some keys so you can use it in the game, for example: Print Screen and ALT keys. 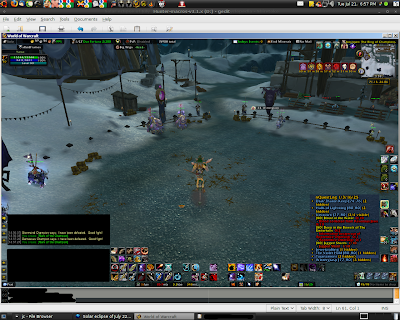 And you are done! Congratulations and welcome to the World of Warcraft on GNU/Linux!!

Play World of Warcraft on Ubuntu Linux Smoothly by gameshogun™ 🎲 is licensed under a Creative Commons Attribution-ShareAlike 4.0 International License. Permissions beyond the scope of this license may be available at Legal Notice.