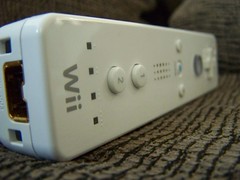 Today I found out about the Philippine National Police’s “Criminal Investigation & Detection Group” (or CIDG) Project Angel Net: Internet Child Protection Program. They have a link about the different online risks “children” can and will encounter in cyberspace, good enough and informative.

However, one particular entry or explanation that caught my attention and which prompted me to write this blog post is the section on gaming. On their website, they defined it as a new epidemic, that it takes a toll on the mental well being of players, and that this disease is as equally debilitating as an addiction to drugs or alcohol. 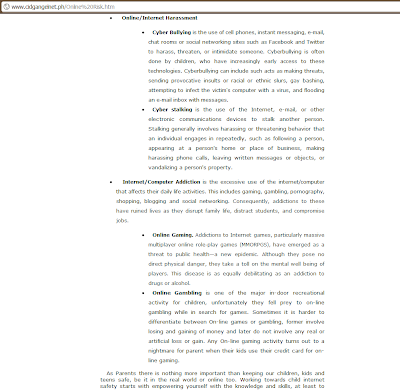 Here is the section on “Internet/Computer Addiction” which includes “Online Gaming” as found on: cidgangelnet.ph/Online%20Risk.htm

Internet/Computer Addiction is the excessive use of the internet/computer that affects their daily life activities. This includes gaming, gambling, pornography, shopping, blogging and social networking. Consequently, addictions to these have ruined lives as they disrupt family life, distract students, and compromise jobs.

I could go a long way with the inclusion of “blogging” as an addiction that have ruined lives but it is not the subject of this post, rather it is the way gaming was defined, particularly Massively Multiplayer Online Games or MMOGs.


Image of Human Beings Are a Disease

Agent Smith! Online gaming is a disease! I guess they have an Agent Smith in the CIDG and probably he wrote the (obvious) anti-gaming description above? I do not know but gaming is not a threat to public health and far from being equally debilitating as an addiction to drugs or alcohol.

Back in 2007, Doctors backed away from a controversial proposal to designate video game addiction as a mental disorder akin to alcoholism. Addiction experts also strongly opposed the idea at a debate at the American Medical Association’s annual meeting.

The article goes on:

They said more study is needed before excessive use of video and online games – a problem that affects about 10 percent of players – could be considered a mental illness.

“There is nothing here to suggest that this is a complex physiological disease state akin to alcoholism or other substance abuse disorders, and it doesn’t get to have the word addiction attached to it,” said Dr. Stuart Gitlow of the American Society of Addiction Medicine and Mt. Sinai School of Medicine in New York.

Again: There is nothing here to suggest that this is a complex physiological disease state akin to alcoholism or other substance abuse disorders, and it doesn’t get to have the word addiction attached to it. (my emphasis)

Politicians and other moral crusaders frequently identify individuals or groups they define as evil and immoral so society can channel blame and fear. Video games, those who play them, and those who create them have become targets because they seem to pose a threat to children. But, in a time when video games became a major part of many young people’s lives and were enjoyed in record numbers, homicide arrest rates fell by 77 percent among juveniles, school shootings remained extremely rare, and students had less than a 7 in 10 million chance of being killed at school. So why are politicians blaming video games?

So does gaming ruin lives? Does it disrupt family life and compromise jobs? NO, N-O, NO. If we want to point fingers here, then face the mirror and point to your own image. Seriously my friends, our dear government (yes, including you Agent Smith), parents, what we lack is discipline, discipline, and more discipline.

We can remove gaming from this world, if your constituents and children lack discipline, they will still destroy their lives. They will still disrupt your family, and yes even compromise their jobs. Instead of blaming it on online gaming, why not educate people to have discipline? Isn’t education more long-lasting and less expensive (and less trouble) than gripping your constituents?

What makes gaming bad is the excessive use of it, just like with everything else. We say – anything excessive is not good, right? But defining gaming the way you – CIDG – defined it is in itself misinformation and will not help parents at all, not even help in addressing the real issue – the lack of discipline and (can I say?) failure of our society to provide a healthy environment for everyone.

Many of us who play these games, particularly MMOGs, have lives to live thanks to gaming. Yes, some of us used to be addicted (if you really want to call it that even though the article quoted above says otherwise) but we got out of it. I said it before and I will say it again, the real issue is:

Here’s a more recent article showing us that playing video games is more positive and more beneficial to the person’s growth and our society Why we play video games: An instant guide.

What does this study say about gamers?
Instead of simply acting out aggression or other impulses, players are arguably using video games as a positive, esteem-building exercise. “I was heartened by the findings which showed that people were not running away from themselves, but running towards their ideals,” said Przybylski. “They are not escaping to nowhere, they are escaping to somewhere.”

If playing games, even MMOGs, is good, have benefits, positive effects, and helped people and the society (let’s not turn a blind eye and a deaf ear here), then obviously the problem is not with (online) gaming but somewhere else. Let’s identify that and address this issue of excessive use by going to the root of it all. I believe we all know already what and where that root is.

It’s not yet game over Agent Smith!

Article Name
Philippines PNP-CIDG: Addiction to Online Gaming is a Disease
Description
Once again, people in position and power are dropping statements that we have known for years studies has dismissed: Game Addiction.
Author
Yuki
Publisher
gameshogun™

Philippines PNP-CIDG: Addiction to Online Gaming is a Disease by gameshogun™ 🎲 is licensed under a Creative Commons Attribution-ShareAlike 4.0 International License. Permissions beyond the scope of this license may be available at Legal Notice.